I write this sitting at Glasgow Central train station. I am about to get a train to Lanark on the first leg of my journey to take the chickens home.

I have been away from home since last Thursday, as I was filming Farpaisean Chon Chaorach in Ireland at the weekend. Because of this, I had to rejig most of my plans. The 320 chickens had been due to arrive last Friday, but obviously that wasn’t going to work as I was in Ireland, and I couldn’t really turn down a trip that was going to pay me 1/3 of the cost of the chickens!

The company I’m buying the chickens from, JSR Services, have been very accommodating. They were initially supposed to drop them off in Inverness, as part of a bigger delivery that they were making, but said I could pick them up from a farm in Lanark if I wanted to delay things. The problem then was getting a van down to Glasgow so that I could drive it back up. This is where the new series BBC Alba are filming came in handy. They obviously want to film the arrival of the chickens, so it made sense for the cameraman to drive the van down. The next problem was lack of spaces on the ferries. At very short notice, I had to delay everything by another day, as there were no bookings available on ferries to or from Lewis/Harris.

So why am I getting a train? Well, John the cameraman, quite rightly, wanted to avoid Glasgow this morning, so I am getting the 6.50am train to Lanark before I take over at the wheel, pick up the chickens and start the long drive home. Due to busy ferries, I have to go home via Uig/Tarbert, so that adds to my journey. So many things can go wrong today, I just hope they don’t!

What an exciting time here! Air An Lot is going to feature on it’s very own series on BBC Alba (it’s not going to be called Air An Lot tv!)

I had a meeting with MacTV last month and they got the green light 10 days ago. They’ll be following me over the next year as I set up the egg production side of things, along with the croft tourism and everything else that goes on.

We start filming tomorrow, with a cameraman following me as I pick up my 320 chickens.

I have a very busy and very exciting year ahead of me. Bring it on!

I am currently in the middle of the busiest period of work I’ve ever had, and I love it! Full steam ahead right now with getting everything ready for the chickens and the tourism side of things, so much going on and I don’t have time to blog about it all.

Last week I erected my new signage, and I’ve already had lots of nice feedback about that. I bought a portacabin a couple of weeks ago and I hope to have it in place in the next week. I actually had a local contractor, Danda, here yesterday, clearing the site for it.

It is right behind my house, on the site of the original house (latterly a barn) that was on the croft. My parents knocked it down in 2004 as part of the extension had started to come away but I am now majorly regretting allowing this to happen. It would have been PERFECT for what I’m doing now and would have had such a nice story behind it. Anyway, what’s done is done. Danda (from the next village) was actually the contractor who knocked it down initially, so he knew what was in store. 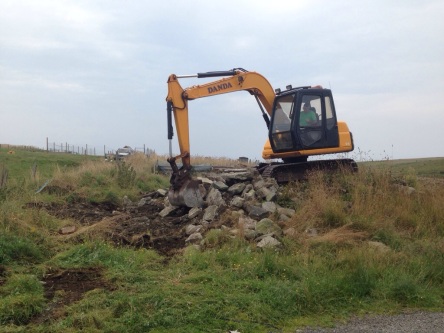 The stones had been left there for 10 years, just in case they’d be handy at some point, which is now the case.

They were an eyesore to be honest, but one that I had grown accustomed to. You’ll notice that there is still a pile of stone behind the site, that’s being saved for the barn I intend to build in the next year. No point getting rid of that stuff if I then need to go any buy more infill later.

The haulage company I intend to use to get the portacabin over from Stornoway have been busy with the Heb Celt Festival, so hopefully they’ll have time this week to move it. Once in place, I hope that one of my Ness FC teammates is going to paint it for me and I’ll get it up to the standard required. One of the two rooms is going to be my egg-packing station for when the 320 chickens start laying. I had someone from Environmental Health cast their eye over it last week, just to provide advice on what I need to do to get it up to scratch. It won’t need too much work or money thrown at it.

The chickens themselves are due to come in the next week. I was initially supposed to pick them up in Inverness on Friday but I’m now going to be in Ireland until Sunday, filming Farpaisean Chon Chaorach. Plan B is now leave Glasgow at 6/7am Monday, pick up the chickens in Lanark, drive home and get the Uig-Tarbert ferry, drop off the chickens at home and play a cup semi-final for Ness at 7pm. I’ll be over the moon if all that works.

My hen house will hopefully be ready in time for this. It has to be! I’ve been badly let down by a timber merchant and my joiner is short of 4×2. If I can’t get them to him early tomorrow, I’m in serious trouble. I’m so lucky I’ve reduced my hours at work though, there’s no way I’d be able to get everything ready otherwise!

There’s also one major piece of exciting news that I’m not allowed to share yet. Hopefully I’ll get permission to do so this week!

I am delighted today, I have my new signage up. I approached Comunn na Gaidhlig a few months ago about signs and they are funding 60% of the costs, given that they are bilingual.

My friend Domhnall Cheocaidh designed the logo while I used Hebridean Graphics to produce the signs. I can’t recommend them highly enough.

I now have one sign on the main road

And a smaller one at a wee junction in my road 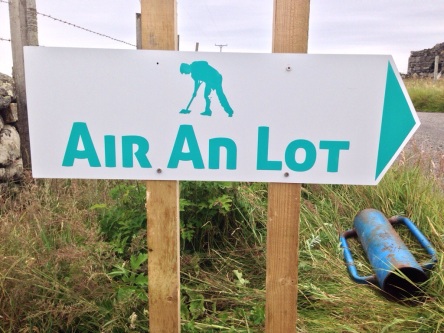 I spent a relaxing morning in the fank yesterday, all on my own, tending to the sheep’s feet.

The hooves of the sheep are like our own nails; always growing. You can get things like foot rot, which causes the sheep pain/discomfort and is not nice. When shearing last week, I noticed a couple of the sheep had longer hooves that needed trimming, so I took them all back into the fank to sort them. 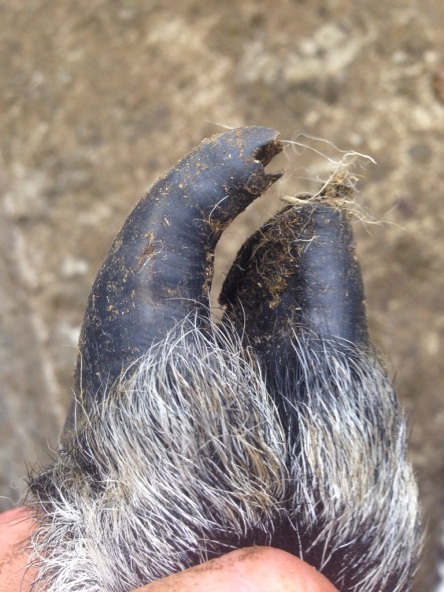 The shears snip through the hoof easily and the sheep feels no discomfort.

The end product looks much neater, just the way it should.

The beauty about our traditional stock management system here, is that things like foot rot are minimised by methods that have been used for generations. Sheep here have traditionally spent part of the winter on the moor. The heather is perfect for cleaning in between their hooves, meaning they are clean and don’t need as much human influence. Mine have just spent 2 weeks in my apportionment, which cleaned out their feet nicely. No sign of foot rot or any diseases, just some superficial trimmings required.

Scottish Water are working in our end of Ness just now, replacing the mains water supply. 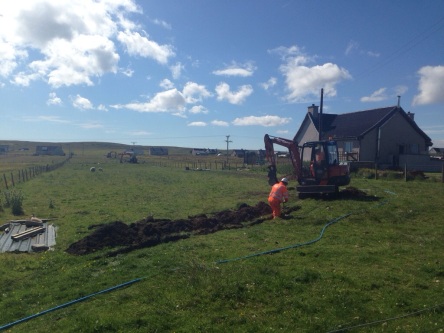 I have had 3 diggers working on my croft for the last few days, as the line for our road goes along the length of it.

I was talking to the guys working on it on Friday and they told me that my croft will be much, much drier once this work is complete. The old asbestos piping has been leaking along its length but that should all dry up.

I had a contractor in last year digging new drains because of how wet that part of the croft was, now it all makes sense!

Increased water pressure will be a bonus too!

I bought a portacabin!

I am buzzing just now! Shearing was cancelled so I nipped over to Stornoway this afternoon to do a little deal. I’d been looking for a shed/unit to use as a base for Air An Lot for a few weeks now and the For Sale sign in two portacabins caught my eye yesterday.

The one that looked great on the outside, didn’t look as good on the inside, while the tatty exterior on the other hid a nice, practical interior.

So I bought it. I’ll have to arrange for it to be taken over to Ness next week and figure out exactly where I’m going to put it.

My idea is to have somewhere for people to wait, get changed, hang their jackets etc, while also giving myself a wee office that’s not in my house.

I am very excited!