The week before lambing was due to start was a tough one. Two dead ewes, 8 dead lambs, and a dead turkey.  From my first 5 sets of twins, I have only 2 lambs to show for it.

But the day before the first lambs appeared, I came home to find my turkey dead, with a nasty gash above its eye. I still haven’t figured out what caused it. 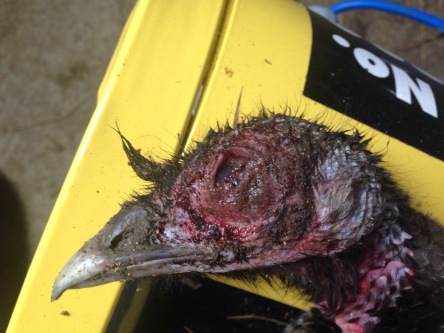 That was bad enough, but things got worse the next day. I went to feed the sheep around 9.30 (it was a Sunday) and noticed one of the sheep didn’t come. I went to her with some feed & thought nothing of it, as I suspected she hadn’t heard me call due to the wind and she wasn’t due to lamb for another few weeks.

An hour later though, I found these two wee lambs, which had been aborted.

The next few days saw more of the same. First I lost a ewe to “Twin Lamb Disease” (aka Pregnancy Toxaemia) 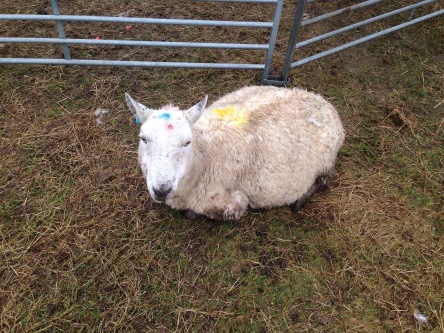 She looks bright enough here, but was dead within 24 hours. Twin Lamb disease is where the lambs are basically a parasite and all the energy & nutrition goes into them, rather than keep the sheep alive. Horrible seeing them fade away so quickly.

Anyway, the ewes were all moved into their lambing fields. Here are the singles getting their first feed in their new home. 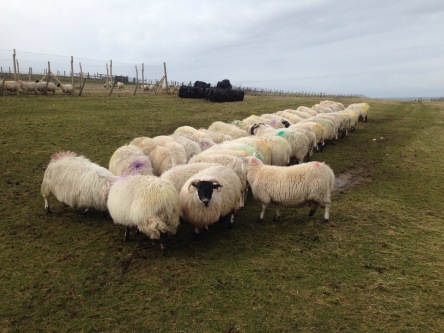 And then the first live lamb arrived! A cracking Cheviot Texel Cross.

it’s Sunday afternoon and I am taking a much needed break from lambing. This is the most sheep I have lambed in a single year, and it has been tough.

I’m going to write several blog posts today, about some of the ups and downs of lambing so far. This is as much for myself as it is for anyone who reads the blog! I’ve found it very useful, going back and reading over posts, several months later.

To date, I am almost two-thirds  of the way through lambing. Still a way to go!

I’m sitting on my bed at 8pm, just having had a shower and feeling exhausted. Today was an unplanned day off work and I expected to take it reasonably easy, but that wasn’t to be the case.

We had a gale today, probably 60mph gusts throughout the afternoon, with strong wind and heavy rain all day. 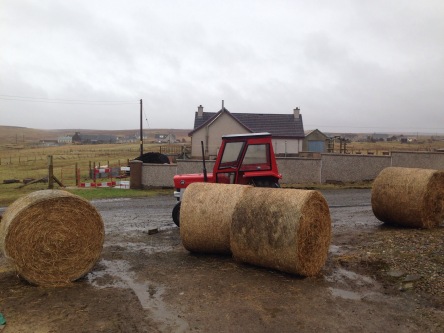 Yesterday, I got a load of big bales delivered, so I took the tractor out for the first time in 2015 and moved the bales to the appropriate fields. All was going smoothly until the tractor got stuck in reverse! Not one to give up when I’m in a working mood, I finished job while drivinng backwards.

Next, I checked the livestock. One ewe, scanned for twins, was on her back, and had probably been so for several hours.  I righted her and took her out to my parents ﻿barn. I noticed a wee bit of blood round her rear, so I phoned the vet to be safe.

The vet gave her the usual injections but also left me some pen & strep to administer over the next few days.

Fortunately, the blood around the rear was a peck or two by a crow, and not the beginning of her aborting, as I had initially feared. I had hoped it was a peck, but you always fear the worst!

When he inserted the digital thermometer into her, she was so cold it didn’t get a reading. Looks like I got to her in time. She had a heater beside her for most of the afternoon and was eating when I checked her around 7.

While the vet was leaving, I noticed 2 hens, who were standing around looking very sorry for themselves.  They were outwith the hen enclosure and totally soaked. They were so cold, they couldn’t move and didn’t look like they’d last long.

I took both out to my mother and we both sat in front of the fire, drying them and trying to warm them up. I left them with my mother and went to feed the sheep. When I came back,  I was SHOCKED at what I saw.

I’m so surprised at how well, and quickly, they’ve recovered. They’re in the barn tonight and will be back in the hen house ﻿tomorrow.

That’s not it though, there was also a recently-acquired lamb that was suffering from exposure too. It spent the day between a heater and a heat lamp! It too will be kept inside for a few days.

Predictions then are then that hens are fine, the lamb should be ok but I’m worried about the ewe. She’ll need some TLC.

How to make sure you get your fill

Tired yet satisfied after getting everything done today. The ground is so much wetter than it has been at any point this winter. Everywhere is waterlogged – and slippery!

I wasn’t due to clean out the hen house until Monday, but had to do it early as it was so mucky. Hebs are staying inside and when they do go out, they take mud back in with them!

That’s me for the weekend now, apart from feeding the sheep tomorrow. I need a rest!

I did my rounds today and noticed one sheep acting a little funny. Usually they all come running as soon as they hear or see me. Today, most of them were at the fence before I called them, apart from one away on her own. As soon as I called, I saw her ears twitch and she came running, although a little uncertain of herself.

I lost track of her in amongst the flock, but soon spotted her, and her problem. She was blind in both eyes.

The eyes go grey and the sheep is temporarily blind. I’m not sure what it’s called in English, but we call it ‘an duile’ in Gaelic.

As my pickup is off the road, I’m using my dad’s van, giving opportunities to take some selfies before I took her home 🙂 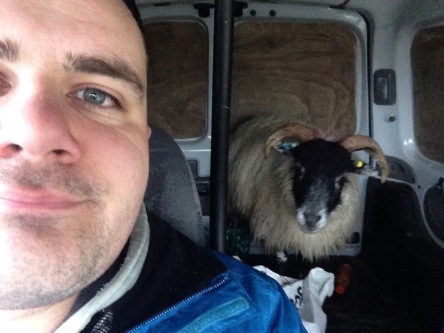 Fortunately I have some opticlox in and have treated her. She’ll improve in the next few days. Hopefully the fact that I got her very early will minimise the risk to the rest of the flock.

It’s not uncommon and I had issues with it in 2012 and also 4/5 sheep last winter, including this same ewe.

Yesterday was a very strange day. At 9am, it started snowing and we had total whiteout conditions

So I prepared for a long weekend of feeding animals, only for the snow to disappear and be replaced by bright sunshine!

I’ve only had a quad for a few months, and I honestly don’t know how I survived without it before!

It’s been invaluable, particularly at this time of year when the hen house has to be kicked out regularly and sheep need feeding!

Ticks are not something I have to routinely deal with on my livestock. Yes, the cats seem to pick them up, but I’ve only once seen a tick on a sheep. That was until last week, when I saw two in 5 minutes!

I was drenching & injecting the sheep the day before scanning and spotted ticks on two of them. One under a sheep’s chin and one of the side of it’s neck. I can only imagine that the rest had ticks all over them too. They were all dipped in October, so these ticks have attached since then. The winter has been mild though, so ticks are still active. 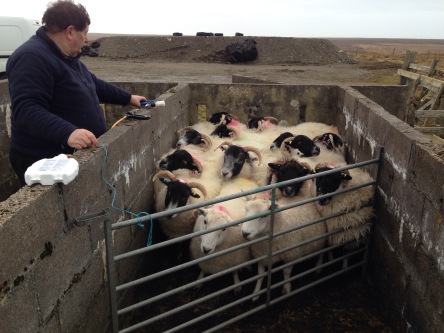 My pickup is one of the most useful things I own. I go everywhere in it and do everything with it. But not for a wee while.

On Wednesday, I was pulling a trailer and my clutch went, completely. 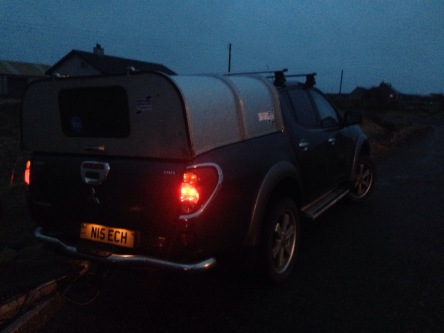 I was on the main road, fortunately, so help wasn’t too far away. I flagged down a passing van, which happened to be Irish workmen, and they gave me a lift up to my friends.

The clutch was damaged a bit last summer, during a problematic tow of a boat up a slipway. It had been acting up recently but the weight of the trailer was obviously too much for it.

Thanks to Duncan & Donald for getting me and the trailer back home!

Air an Lot
Blog at WordPress.com.