The last two nights have seen a lot of late night hen house action. Being back at work means that I have to do most of the croft work either before or after work. Being a night owl, the mornings are a last resort!

Fortunately my father is looking after the sheep this week, so *all* I have to do is tend to the hens.

Because the weather has been so poor the past week, the hens have barely ventured outside. This means that they are eating A LOT more feed. I usually fill the feeders once a week, with around 18 bags. This week’s 18 bags lasted from Saturday until Wednesday! Another 15 taken up then, in the pitch black.

Tonight was even worse, sorting out eggs and collecting them from the hen house in 60-75mph winds! I was extremely concerned I was going to get caught by some flying debris!

Anyway, all done for the evening and preparing for heading to Aberdeen in the morning. Doing a spot of filming there and then back home on Saturday morning – all weather permitting.

First of all, my apologies for lack of blog posts. Summer is a really busy time for me, with croft work, day job, filming and football keeping me busy, never mind throwing 320 new chickens into the mix!

I’m relaxing in Glasgow just now, having spent the last 3 days filming at the Scottish National Sheepdog Trial. We’re filming series 7 of Farpaisean Chon-Chaorach, a programme I have been co-presenting since BBC Alba launched in 2008. This is our Scottish Team

Our typical day at a trial begins with us recording our links during the morning and then, after lunch, interviewing the top placed handlers of the day, before a winner’s interview and then our closing piece to camera. Some days, like Thursday of this week, can be very long. We weren’t clear of the trial field until around 9pm. We have two elements to the film crew; the majority film the runs, while the Single Camera Unit (us) film the links & interviews. This is made up of presenters, cameraman and director. Here is a post-National selfie of myself, Catriona, Craig and Neil.

I go home tomorrow and prepare to do it all again next month for the International Sheepdog Trial.

What an exciting time here! Air An Lot is going to feature on it’s very own series on BBC Alba (it’s not going to be called Air An Lot tv!)

I had a meeting with MacTV last month and they got the green light 10 days ago. They’ll be following me over the next year as I set up the egg production side of things, along with the croft tourism and everything else that goes on.

We start filming tomorrow, with a cameraman following me as I pick up my 320 chickens.

I have a very busy and very exciting year ahead of me. Bring it on!

I’m working on my next article of the Scottish Crofting Federation﻿’s Crofter magazine, which I think is due out in March. Here is the piece I wrote for the December edition:

This might come as a bit of a surprise, but going to the fank is a real social highlight for me. That statement might say more about me than I care to admit, but it’s true! I know people reminisce of days gone by, when everyone helped each other, but these days haven’t gone completely. Our wee village still come together quite often and help each other with dipping, shearing, gathering etc. We recently dipped all the sheep in our village, and I can’t describe how much I was looking forward to it!

I know it’s one day when the work isn’t too strenuous, there will be plenty bodies to help out and we’ll have a good laugh at all the stories from the bodachs. This year was no different; almost perfect weather, sheep all doing as they were supposed and lots of young lads on hand to help out – and the best thing was the help from the youngsters. At 29, I’m still classed as a youngster myself, in crofting terms, but we had several teenagers giving up their Saturday morning lie-ins to help out. I think you can go on all the courses you want, but there is nothing that can beat hands-on experience in a real working environment. No sterilised work-place here; you are told exactly what has to be done, go ahead and do it, while under the watchful eye

Communal activities like this are a window back in time, particularly for the younger lads. Stories about the arguments and characters that used to frequent our fank are common – as are the unrepeatable stories of what they go up to! Young people have so many distractions these days, but I really think communal days like this help crofting lose any fuddy-duddy image it may have. For people like myself, who are employed full-time, it’s not always easy to make time for communal days and it is often easier to soldier on alone, but the long-term benefits are incalculable. Roll on next year!

I have agreed to arrange a series of practical training courses in Lewis, on behalf of the Scottish Crofting Federation. Still in the early stages of planning, so I thought I’d see what kind of courses people would like. Have a look at the link below, plenty of examples of other courses there. You can leave a comment here, or private message me any ideas/requests.

I received a phonecall from the BBC shortly after 12pm, telling me about a stranded dolphin on Traigh Shanndaigh, the beach in Eoropie. Off I went, armed with my camera, to see what the situation was.

The beach isn’t accessible by vehicle, so we had to walk/run maybe 1/4 mile to get there (my brother Innes was with me).

There were a few people about, and one local, Shona Morrison, told me that the vet, SSPCA and British Divers Marine Life Rescue (BDMLR) had all been informed. The dolphin had more than likely been on the beach since high tide on Wednesday night, maybe 11ish pm. No obvious injuries but it seemed to be exhausted, as you would probably guess.

Trevor from BDMLR was first on site and started thinking about how it would get refloated, although decision on the welfare of the animal was to be the vet’s decision. Hector, the vet, wasn’t far off. Experienced in this situation (he mentioned dealing with 7 or 8 Sperm Whale strandings), his first reaction was that the sea was far too rough to consider releasing an exhausted dolphin into the breaking waves. After examining the dolphin, a male White Beaked Dolphin, it was considered to be in poor condition. There was some discussion about moving it to Port of Ness harbour, to release it there, but the stress would probably have been too much for it. The fact that the dolphin was on the high water mark was another indication that it was more than likely sick or injured and that it was washed ashore, rather than stranded. The only option was euthanasia and by the time Hector had returned with the necessary equipment, the dolphin seemed to have given up the ghost and was fading fast – in my opinion.

Sad end to a lovely animal. First time I’ve been as close to a live one.

Here is a video of what happened.

I’m in Glasgow now, about to record the last day’s voiceover for series 6 of Farpaisean Chon-Chaorach. This will be going out in January.

Hampden bound for Scotland v Croatia when I’m finished. This is a good day! 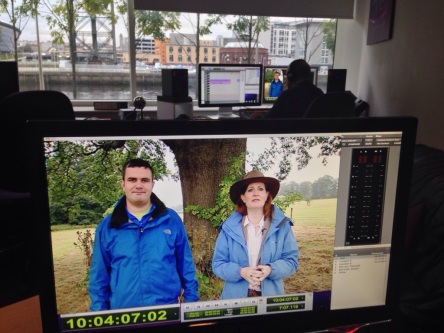 What a beautiful day – but I spent most of it inside!

It was a cracking morning, I took this picture at 6am, with my iPhone.

As you can see, pretty nice. I noticed the sheep on the top of the next hill, so popped inside to get my SLR and zoom lens, to get a picture. Donald “Chops” Morrison was on his way home after checking his sheep too. I think it paints quite the picture! 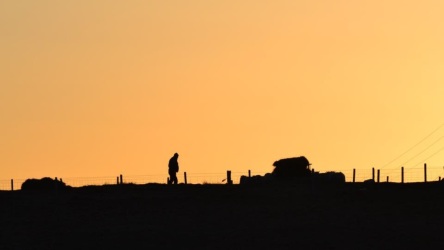 At 10am, I was in Stornoway, and spent most of the day there, doing voiceovers for Gaelic cartoons. I was a bull, pigeon, chocolatier, cool sheep, geeky fox, zebra, goose – and many more characters! I got a 2 hour lunch break and headed back home to Ness (a 30 min drive away) to check the sheep. All was clear.

I got home quite late and was greeted by a set of twins. The wind had picked up and as they were still a little wet, I moved them into shelter, to minimise impact of wind chill. They were fine in the morning. 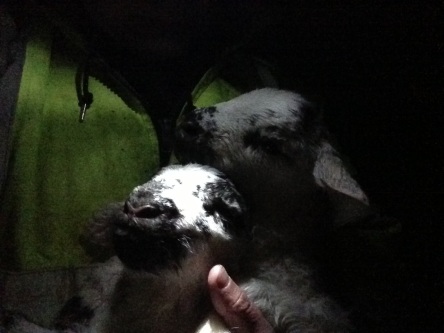 My new programme started last night, Sgoil nan Cuileanan/Puppy School, all about training 10 young dogs. Very entertaining and you can watch it on iplayer here

I’m in Aberdeen for work this weekend, so no updates from the croft. Spent all day yesterday in this rather nifty office

I recorded my voiceover parts for the Sgoil nan Cuileanan (Puppy School) series I’ve been presenting for Eyeline Media. Really happy with how it looks – all you dog lovers will have to keep an eye out for it. As far as I’m aware, it’ll be shown from 1st April.

Heading back to Inverness today, in an hour or two, and then flying home tomorrow morning – and going straight to work! No rest for the wicked!