From now until May, Saturdays are going to be busy. The days are much shorter, so I don’t get anything done during the week, meaning all my chores have to be squeezed into a few hours on Saturday. Today was the real start of my winter, but I took it quite easy!

My hens have been in the new hen house & run for a week now. I’ve had no problems at all, until I emerged from the house this morning, to be greeted by THIS: 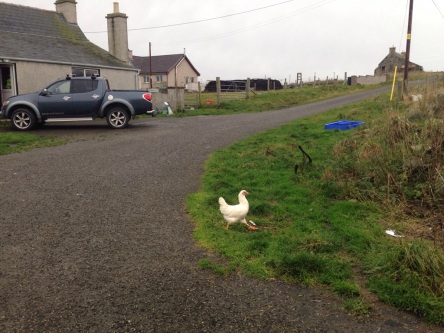 No idea at all how it escaped. I put it back in and then decided that it was time to clean out the henhouse.

The hens have been there permanently for a week now, but 10-20 have been using it for around a month, so it needed cleaning out. It stank. Wasn’t nice. I got it done!

As I was topping up the feeders & the water, I thought that it would be so much easier if I could have the food stored nearby, instead of out at the house or barn. I’ve been thinking about this for a while, but decided to get my finger out today. I went down to the Habost Amenity Site – waste/recycling point on the site of the old dump – still referred to as the dump locally. There, I ‘recycled’ this fine storage unit.

Yes, it’s an old freezer! Judging by the sheep feed in the bottom, another crofter had been using it as a similar store.

That’s it now beside the hen house, with half a bale of straw and some bags of feed in it. With the lid anchored down by the biggest stone I could find.

My parents have been away for the last couple of days, so I went out to theirs to feed the cats. I had a wee chuckle to myself when I saw the cats waiting for me!

Why do cats love boxes so much?

I have 7 chicks in the barn. They are coming on nicely and I let them out every day. They’re funny wee animals, they sleep in behind one of the freezers! 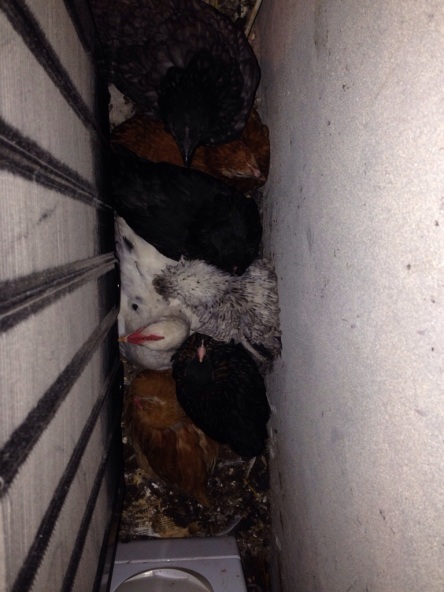 One last thing to do, I checked the sheep to make sure the rams have been doing their thing. The cheviot I got last week has been doing his thing (yellow marks)

He has served 3/4 of his 20+ sheep, but the Suffolk hasn’t done ANY of his. Not time to ring any alarm bells just yet, but I caught him today, just to make sure his harness was properly fitted. 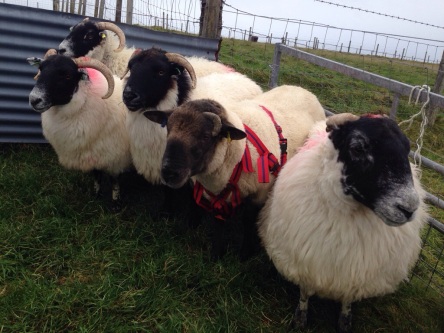 I tightened it up a wee bit, so hopefully I’ll see some orange markings on the sheep soon!

Bud came in with me too. Here he is flying over the fence!