JUST ONE MORE TO GO!!

I’m a relieved chap this morning. I was semi expecting a dead lamb or dead sheep this morning, but it is all good.

I had noticed this cheviot acting strangely on Tuesday night. I had a look at her and nothing was showing. She was acting weird all day Wednesday and then spent yesterday stretching her back legs out behind her and not doing much else. I had another look but nothing. I was worried that it was ring womb, something I’ve had to deal with before, losing a set of twins but the sheep was ok.

There was no discharge or any signs, but I was worried that I may have missed that sometime during the day on Wednesday or Thursday. I phoned the vet but after a quick conversation decided to leave it until the morning and see how things were.

I wasn’t expecting much today but I was delighted to be greeted by this wee fellow!

Mother is doing fine and has plenty milk, so nothing to be concerned with. No need for the vet but I’m off to the doctor myself, I’ve been soldiering on with a really sore ear all week and want to nip it in the bud before it flares up. 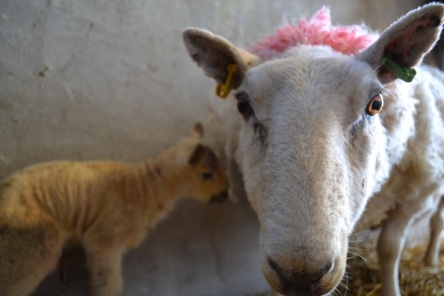