Yesterday was all about preparing for the first proper gale of the winter and today was about the clean-up. The winds were recorded at 86mph in Eoropie, albeit at a non-Met Office weather station. It was windy. I was out in the Ness FC Social Club last night and got the minibus home around 2.30, when the wind was at its height. The minibus door was struggling to stay closed! Then the power went off just after 3am, with the whole of the Western Isles out, apparently due to debris hitting a substation in Skye. It came back on around 8am though so wasn’t too bad.

Once I got up (I was ‘tired’), I had a quick check to see if there was any damage. There was. From the kitchen window, I could see that some of the metal sheeting I used as shelter for the vegetable plot had blown away.

You can see the sheet against the fence in the background. It is leftover roofing material and tore around the nails. 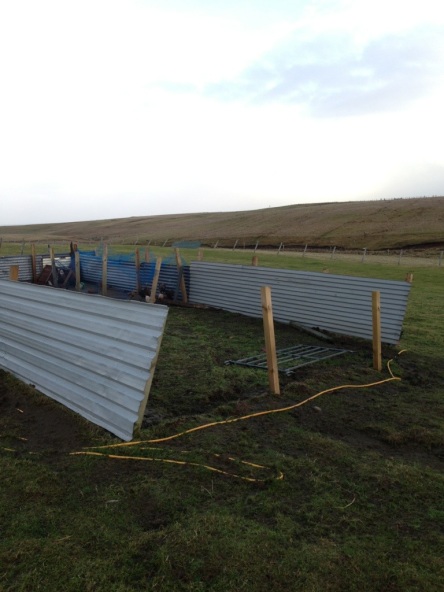 The remaining shelter had taken a bit of a hit too.

But the biggest problem was that it seemed the sheet hit the chicks’ run and left it damaged.

A couple of loose fence posts, as well as torn netting, meant that I’d have to do something.

The run is just temporary and I was considering moving it on Monday so that was the decision made. I took the chicks into the barn for the weekend and I’ll build a new run on Monday.

I phoned Innes and he came in to help me.

They were soon in the back of the pickup

And now they’ll be keeping the poorly lamb company for the next couple of days. 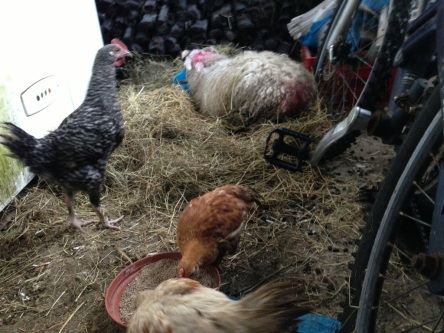 I had to collect the sheet that had blown away, along with tidy up some bits and pieces, and then I checked all the sheep. They are all fine but I’ll have to do the same tomorrow, as we’re due another gale tonight.