We’re approaching Gale Season in Gael Land. We’re due 70+mph winds tomorrow so I spent a while today tidying up and taking in all the stuff I don’t want to be blown away. 70mph is an above average gale but it does get a lot windier; 80-90 usually happens a few times per winter and 100mph usually once per winter. Don’t expect to hear much on the news though, we’re not the central belt or London so no-one cares!

As well as being windy, it’s cold today too. Everything was frozen this morning so I had to break the ice to let the animals drink.

Took the slab of ice out

Because it’s cold and windy, I decided to do something to help the lambs. These are the wee ones that are being fattened up for the freezer next year. I put up a wee shelter to help them through the next few days, as the field they’re in is sheltered from North, South and West but not the Easterly we’re getting just now.

I’ll only have it there for a couple of months but it’ll provide them some much needed shelter.

It didn’t take them long to settle in. 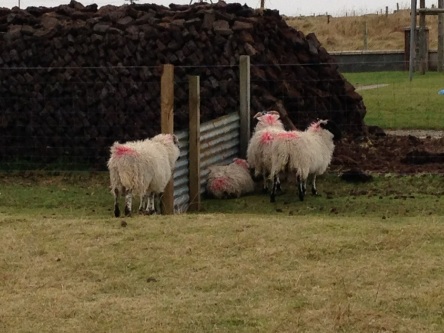 Now to take some peats in for the weekend and sit by the fire!