Well, today is a day of mixed emotions. The lambs are off to be sold. Over 40 of them loaded onto a lorry and off to Aberdeenshire they go, never to be seen again. On the other side, cha-ching! Finally some cash coming in after nothing but spend, spend, spend for the rest of the year.

I’m sure lots of folk think crofters are blood-thirsty lamb killers but that’s so far from the truth!

On Saturday I put the lambs out to our reseeding to save time today. A mere hop, skip and a jump and they were back in the fank, ready to go.

That’s Ally Williamson and Tommy Graham sorting out the lambs, which are then loaded on board.

Roddy Norrie looks while Gordon the driver gets things ready 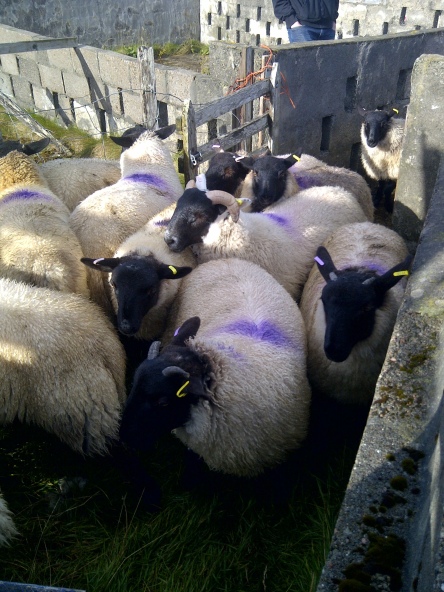 They leave Lewis on the ferry tonight, bound for the sale in Thainstone on Thursday. Fingers crossed I’ll have my cheque by Saturday or Monday. This is the only income I make from the croft so always a nervous time. I don’t work the croft as a money-making exercise but a little extra is always nice! 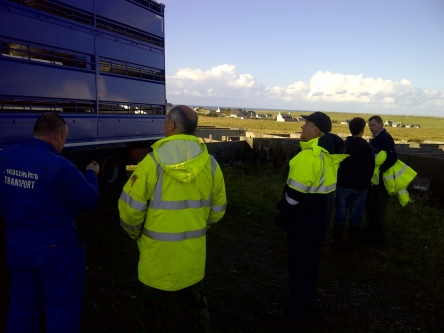 So we all admired our handiwork before heading home. I had a passenger though, one wee lamb that I decided not to send away. I’d been in two minds about it but he got a last minute reprieve as he wasn’t in good enough condition. As you can see, he suffers from Beul Beag – I think the English is short or small mouth. The bottom jaw shorter than the top

That doesn’t sound too bad but it means they can’t eat properly. This lamb is one of the worst I’ve seen suffering from this. The teeth on the bottom should meet the pad at the top

I’m not quite sure what to do with him. I don’t know if he will survive the winter, we’ll have to wait and see if he does, then he might be ok for the freezer next year.

And speaking of freezers, ours will be full soon, with 6 wedders off to slaughter tomorrow. I walked them down the road to make it easy to load them tomorrow

Oh and buy buy lambs is a deliberate pun!