another fine day here, so I went for a walk in the croft with Bud, the pup.  I usually walk in my own croft, but went in number 18 instead, to check the new piglets, who arrived on Friday night.  I let them out of their wee enclosure for a while – and they seemed to enjoy it.

#Bud is intrigued but also a little freaked out by them! 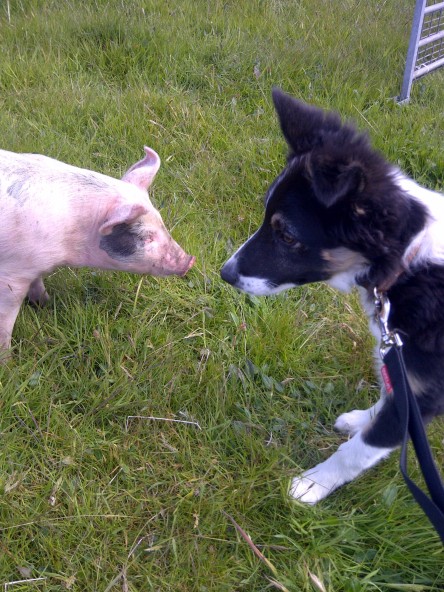 Further on down the croft and I was greeted by a sea of daisies!

I can’t remember what the English is for this plant that’s growing on the crofts, it’s a kind of wild rhubarb.  We call them ‘gallan’ in Gaelic.        This is is growing on a patch of no-mans land and creeping onto the croft. 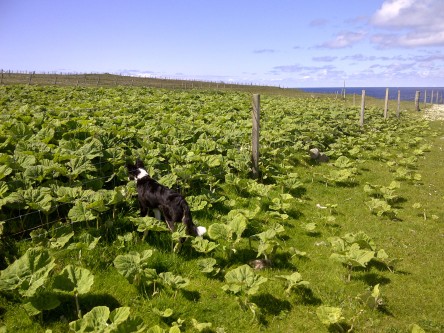 It usually grows quite thickly on my croft too but it’s been quite heavily grazed up until now, so it looks like this just now.

I carried on down to Traigh Chrois, one of my favourite places in the world! 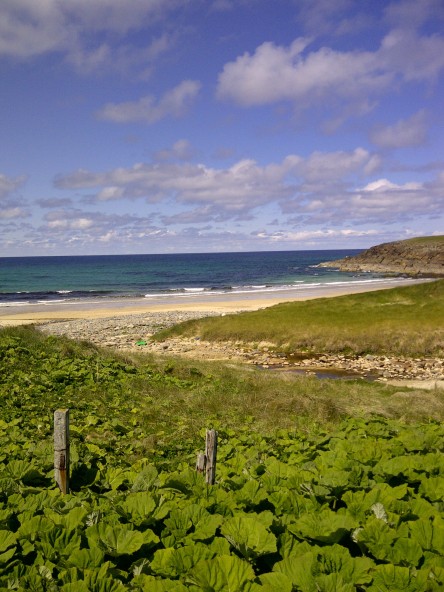 While the rest of the of the country has been suffering from heavy rainfall, we have been suffering from the opposite!  The driest spring/summer in a while.  This is Cross River, which usually covers most of these stones.  This dry spell isn’t totally unheard of, we had a similar spell in 2008.

Slightly further upstream, this is where myself and my brothers Murdo and Innes used to mess about when we went on our Sunday walks.  I remember making a raft here one afternoon, as well as trying to catch tiny fish in jars! 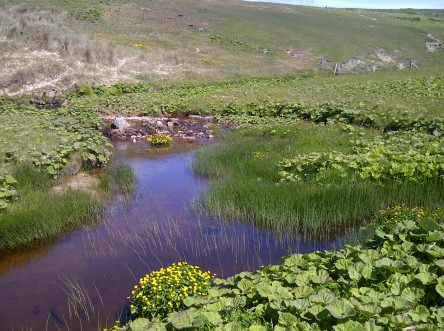 It wasn’t just myself and Bud that were on the walk, one of my cats came too.  Here she is chilling in the shade.  She vanished on the way home, probably off hunting rabbits.

We walked back up through the gallan on the way home.  Bud was loving it.  Rather than walk through it, he was leaping! This is him mid-jump.

I sat down for a wee while and took a couple of pictures of Bud.

As I was sitting down, he jumped up on my back and started barking.  I think he spotted another dog on Cross machair, about a mile away.